“Systems of power self protect” 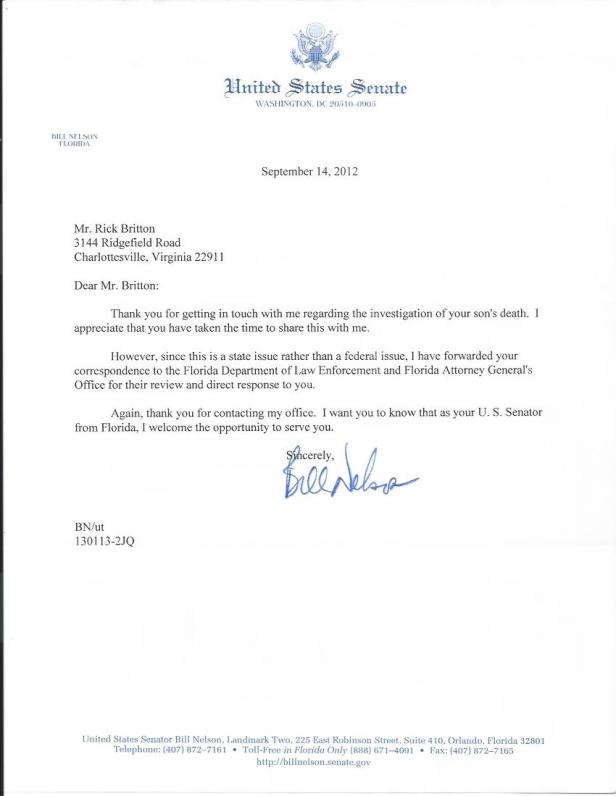 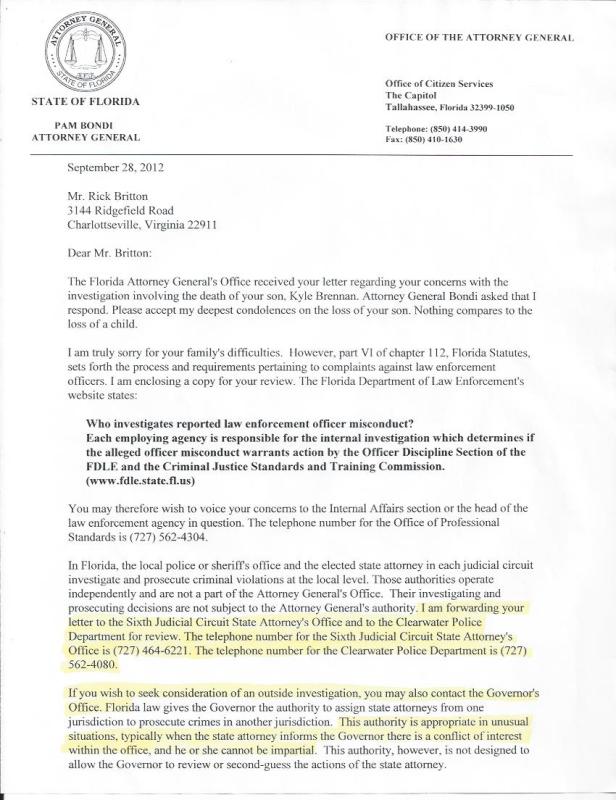 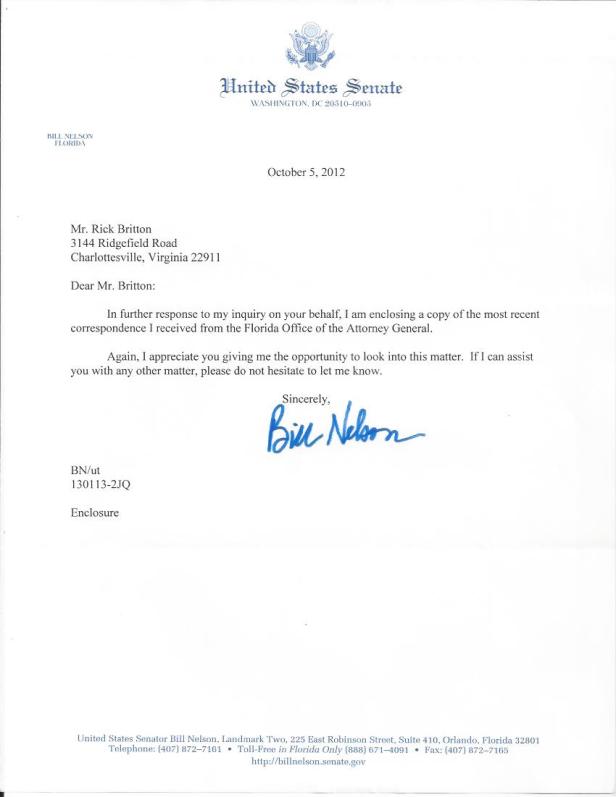 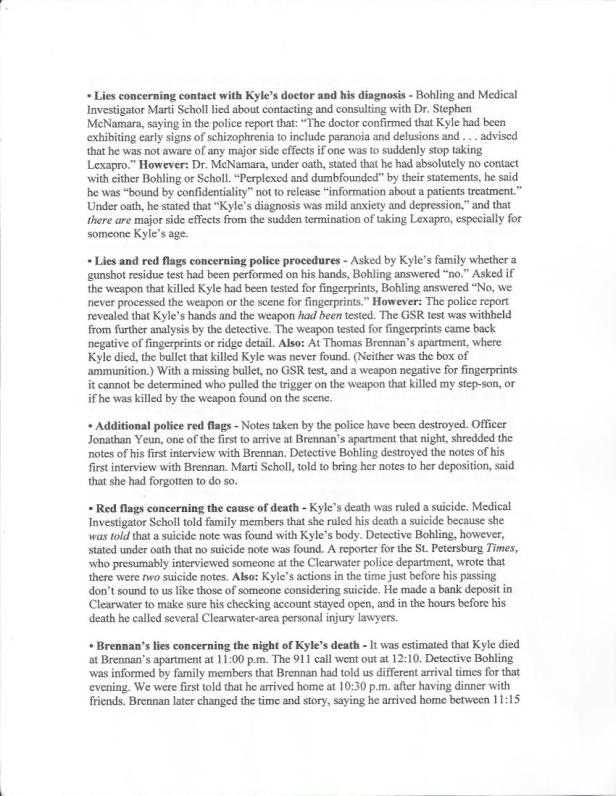 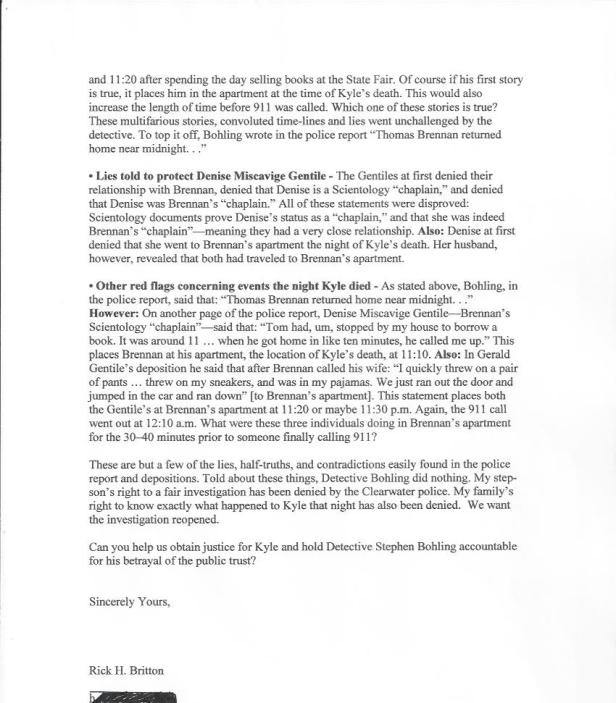 Expert criminologist evaluation regarding the conduct of Detective Steve Bohling and investigative procedures of the Clearwater Police Department.

A copy of this document was sent to AG Pam Bondi.

“Fool me Twice” Shame on the Justice System

When the Tampa-based federal judge presiding over the wrongful-death lawsuit—Stephen Merryday for the United States District Court for the Middle District of Florida—ruled in favor of the defendants’ motion for summary judgment, he noted the following: “Assuming that Kyle’s father [Tom Brennan] and the others [Gerald and Denise Miscavige Gentile] are liars, Scientology’s responsibility is possible, but this theoretical and remote possibility is unsupported by evidence or any reasonable and direct inference from the evidence. If the witnesses are ignored in gross as liars, the fact finder is left to guess. Attenuated and compound inferences and speculation uniformly fail to create a genuine issue of material fact sufficient to avoid summary judgment.”

Not only did the defendants in the case lie, but the Clearwater, Florida, detective investigating Kyle’s suspicious death—Stephen Bohling—lied in his police report. Both of these assertions are easily verified with testimony and documentation.

Did these individuals commit perjury (a felony in the State of Florida)? According to The Law Dictionary, available online: In criminal law, perjury is “The willful assertion as to a matter of fact, opinion, belief, or knowledge, made by a witness in a judicial proceeding as part of his evidence, either upon oath or in any form allowed by law to be substituted for an oath, whether such evidence is given in open court, or in an affidavit, or otherwise, such assertion being known to such witness to be false, and being intended by him to mislead the court, jury, or person holding the proceeding.

Obviously, if a witness deliberately chooses to lie, twisting the testimony in one way or the other, the false testimony may bring about a very skewed outcome in a case.

It’s been shown that Detective Stephen Bohling deliberately lied in his Clearwater Police Report (the CWPR). This has been supported by documents and testimony. His investigation is replete with conflicts of interest and mishandled standard investigative procedures. By twisting statements made by others—in other words, assigning the lies to others such as Marti Scholl of the Hillsborough County Medical Examiner’s Office, or FDLE Agent Barbara Mendez, or Kyle’s psychiatrist Stephen McNamara—he may have believed that he could wheedle his way out of perjury charges. Perhaps he thought he could turn the entire situation into a “he said, she said” scenario.

Unfortunately, all of this illegal behavior had a direct impact on the outcome of the wrongful-death lawsuit.

On June 11, 2009, Attorney Kennan Dandar—the attorney representing the Estate of Kyle Brennan—filed a motion to strike the report.

On June 24, 2009, Judge Stephen Merryday granted the Estate of Kyle Brennan the motion to strike the police report.

Did this stop the defendants from using the content of the police report? Absolutely not!

Excerpt from the deposition of detective Stephen Bohling

Statement of Mark C. “Marty” Rathbun, a former senior executive of the Church of Scientology.

Note: The Narratives above are all Copyright 2019 Victoria Britton. The documents posted below each narrative are in the public domain.

If you have any questions contact Victoria at vbreton2062 (at) gmail.com.