Why were members of the Clearwater Police Department–Officer Jonathan Yuen and Detective Stephen Bohling–not more forthcoming or truthful about the presence of the Gentiles at the Cleveland Street apartment on the night of Kyle Brennan’s death? Why would they not identify these high-powered Scientologists? Were these members of the police department deliberately lying by omission in order to protect two individuals with extremely close ties to the very top leadership of the Scientology organization?

Denise Miscavige Gentile, David Miscavige’s twin-sister—whom Tom Brennan referred to as “Chaplain Denise”—was Brennan’s Scientology auditor. Her husband’s name is Gerald “Jerry” Gentile. In spite of the fact that they at first lied about Denise being at the Cleveland Street apartment on the evening, Kyle died, during their depositions taken in July 2010, Denise and Jerry finally admitted that they were both there. Jerry Gentile stated that Denise waited outside near their parked vehicle. Denise claimed she didn’t go inside because she was wearing pajamas and chain-smoking cigarettes outside of the Coachman building.

In his contribution to the Clearwater Police Report, Officer Jonathan Yuen omitted the fact that present at Tom Brennan’s Cleveland Street apartment were these two important members of Scientology’s first family—the twin-sister and brother-in-law of the church’s worldwide leader, David Miscavige. During Officer Yuen’s brief deposition, taken in July of 2010, he responded 28 times with either “I don’t recall” or “I don’t remember.” And it’s interesting that Officer Yuen’s memory deficit only occurred when he was questioned regarding fellow police officers, medical investigator Martha J. Scholl, or the presence of that mysterious “couple” who arrived at the crime scene during his “short-short” interview with Tom Brennan.

Amazingly, Yuen left them completely out of his narrative. When questioned later, under oath, about people arriving at the crime scene, Yuen responded: “I believe I advised a couple of people showed up.”

The sight of middle-aged Denise Miscavige-the sister of Scientology leader David Miscavige–walking around in her pajamas on a cold damp night in downtown Clearwater would most certainly have been memorable.

Unfortunately, however, it wasn’t memorable enough for Clearwater Police Officer Jonathan Yuen, the first officer on the scene, a public servant who’s duty-bound to remember and record details. During his deposition, Yuen stated that a “couple” showed up at the Brennan apartment during his 10- to 20-minute investigation of Kyle’s death, but when pressed for details he was unable to recall any specifics.

Anybody would have to conclude that in the State of Florida justice cannot be found when it involves the Church of Scientology. 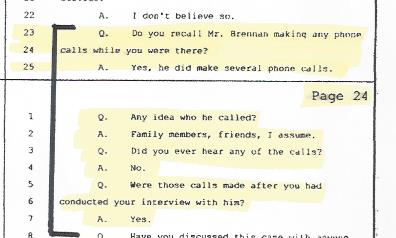