Clearwater, August of 2006: Kyle Under Pressure to Join Scientology

In June of 2006 Kyle’s father, Tom Brennan, first learned that Kyle was seeing a psychiatrist in Charlottesville. Brennan was very unhappy about it, but I didn’t think much of it at the time as he was not directly involved in his son’s life.

Soon after this Kyle and I started receiving letters—and anti-psychiatry hate literature—from the Church of Scientology about the evils of psychiatry and psychotherapeutic drugs. I found these annoying, but I didn’t think much of it. At the time I regarded Scientology as a goofy, harmless organization.

In July of 2006, Tom Brennan convinced Kyle that he should come and stay with him in Florida at his apartment. He promised Kyle that he would take him to look at the Florida State and the University of South Florida campuses.
Kyle traveled to Florida the following month, arriving on August 15. Within three days he called me complaining that his father had duped him. Brennan at the time didn’t even have an apartment—he had lied to Kyle.

Instead, Brennan was living in Tampa, in what Kyle called a “Scientology flop-house.” Kyle said he felt uncomfortable being around Scientologists. They have their own vocabulary, he told me, and they were pressuring him to take a Scientology personality test—something he absolutely refused to do.

Within a few days of this conversation Brennan and Kyle moved from Tampa into an apartment at 423 Cleveland Street in downtown Clearwater. This place is near the old Fort Harrison Hotel, Scientology’s main headquarters. Things seemed to be going a little better after their move from the flop-house.

Within a week I received another distressing call from Kyle. I could hear a lot of noise at the other end of the phone line, and I asked, “Kyle, are you on campus?”

“Hell no,” he responded, “I’m at a mall watching my father make an ass out of himself. He’s chasing people down trying to sell them L. Ron Hubbard books.” (A third-rate science fiction writer, Hubbard founded Scientology in the 1950s.)
“Kyle,” I said, “you’re kidding about this, right?”

“Heck no, Mom,” came his answer. “ Please . . . tell me that I’m not sharing the same DNA with this dude.”
Kyle told me again that his father had duped him. Brennan, Kyle said, had no intention of taking him to look at colleges. Furthermore, according to Kyle, Brennan said that a college education was a waste of money, and that what he needed to improve his life was to get involved with Scientology.

Kyle wanted no part of Scientology. Despite this, however, Tom Brennan and his Scientologist girlfriend, Wendy Jill Borden, had been placing a great deal of pressure on Kyle to take a personality test. (Borden was a staffer at the New York City Org—or Scientology “church”—in Clearwater for training. Borden and Brennan were introduced by their mutual friend Denise Miscavige Gentile, the twin sister of the organization’s head. The two married soon after Kyle returned to Charlottesville in September.)

At this point Kyle wanted to come home. He wanted to go back to school in Charlottesville, at Piedmont Virginia Community College, but the fall semester was already underway. He asked me if I would talk with his professors to see if he could start the semester late, as he did not want to waste any more time.

Kyle called again the following day. He was upset. The previous evening, everybody in the apartment—Kyle, Brennan, and Borden—had gotten into a huge argument. Kyle said they were pushing him to pay for a personality test, and they wanted him to take Scientology courses. They also told Kyle that his mother was “evil” for allowing him to see a psychiatrist. Kyle told me that the argument had been extremely heated. At one point, Kyle said, he told Brennan and his girlfriend what he really thought of Scientology—he thought it was ludicrous—and also how he felt about his father spending all of his money on it.

Kyle was never the same after this visit. 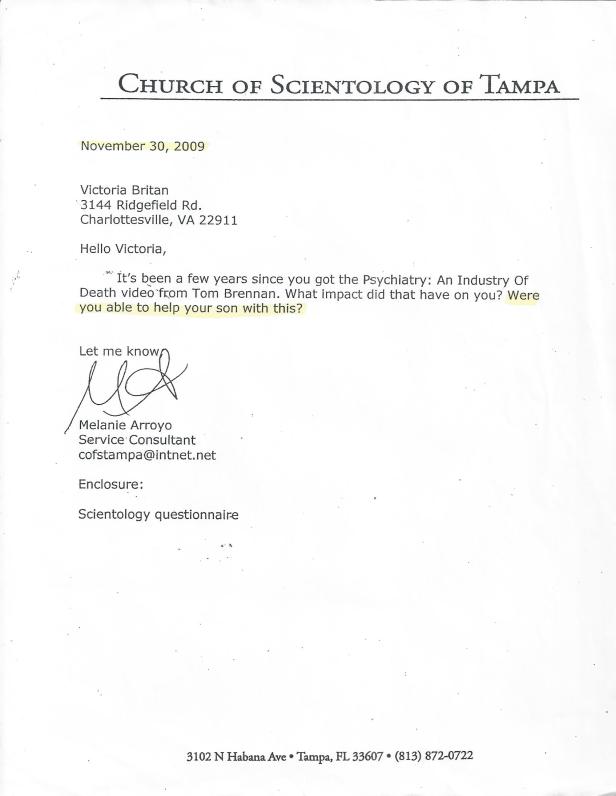 Clearwater, August of 2006: Locked Out, Kyle Befriends a Trio of Unlikely Angels

When Kyle returned home to Charlottesville after his tumultuous visit to Clearwater, Florida, in August of 2006 he related the following: One evening in Clearwater, Kyle—who enjoyed a good cup of coffee—went out to a Starbucks. This particular shop is just down the block from the apartment Kyle’s father, Tom Brennan, had rented at 423 Cleveland Street.

Kyle said that when he returned, the apartment building’s outer door was locked. He tried to call his father who was inside at the time, but Brennan had turned off his cell phone. This meant, of course, that Kyle was locked out for the night.

Heading back towards the coffee shop, Kyle was approached by a disheveled man begging for money. Kyle gave him five dollars, and the man asked: “Are you one of those f—ing Scientologists?” Taken aback for just a split second, Kyle replied, “If I was, I wouldn’t have been able to give you that five.”

During the conversation that followed, Kyle discovered that the man was a homeless veteran, and that he was living in a park not far from Cleveland Street. Kyle had a soft spot in his heart for veterans. Military personnel, and law enforcement officers, were Kyle’s heroes. Back home in Charlottesville, Kyle enjoyed attending military events. He loved hanging out with veterans, and would often draw them out so he could hear their stories.

Kyle and the old veteran, enjoying each other’s company, sat up against the building, under a flickering light.

Two Clearwater police officers, spotting the unusual couple—an older man down on his luck, and a well-dressed 20-year-old—stopped and asked Kyle if he was OK. When Kyle told them about being locked out, the policemen tried to open the outer door. Finding it sealed tight, they told Kyle to stay close by as they would check up on him throughout the night while they were on duty. This promise they kept.

In 2007 my forward-looking 20-year-old son, Kyle Brennan, died in Clearwater, Florida, under extremely suspicious circumstances while visiting his Scientologist father. (Clearwater, of course, is the site of Scientology’s headquarters.) We lost the subsequent wrongful-death lawsuit we filed against Kyle’s father, prominent Scientologists who were involved, and the Church of Scientology itself. Because of the legal expenses incurred, we’ve yet to purchase a proper headstone for our beloved son. Will you help us?

If you have any questions contact Victoria at: vbreton2062 (at) aol.com.

One thought on “Kyle pressured to join Scientology”