Marti Scholl was the Pinellas-Pasco County, Florida, Medical Investigator when my youngest son, Kyle Brennan, died under very suspicious circumstances at his father’s apartment in downtown Clearwater, Florida, the night of February 16-17, 2007.

There were—and still are—a large number of discrepancies in the testimonies and depositions made by those present that evening. And there are also plenty of inconsistencies in the information given to me by Ms. Scholl’s office and the Clearwater Police Department.

(Scholl and Clearwater Detective Stephen Bohling, for example, fabricated contact with Dr. Stephen McNamara, Kyle’s psychiatrist. According to Bohling, Dr. McNamara “confirmed that Kyle had been exhibiting early signs of Schizophrenia to include paranoia and delusions,” said he had prescribed Lexapro, and “advised that he was not aware of any major side effects if one was to suddenly stop taking” it [emphasis added]. Scholl, too, claimed she had spoken with Kyle’s psychiatrist. Dr. McNamara, however, stated under oath that he was “perplexed and dumbfounded” by these statements because he had had absolutely no contact whatsoever with either Bohling or Scholl. Not only had they lied about speaking with McNamara, and concocted Kyle’s diagnosis, but McNamara stated that indeed there were potential side effects.)

I called Ms. Scholl on December 19, 2007, with a list of questions regarding Kyle’s death and the subsequent investigation. I told her I was calling because I wanted clarification. I asked her for the names of the police officers who responded to Tom Brennan’s 911 call, Ms. Scholl said they were Brett Faulk and Jonathan Yuen. This was when I learned, too, that she was the medical investigator sent to the Brennan apartment the evening Kyle died. When I asked, however, why the forensic procedures outlined in section 406.11 of the Florida Statutes were not followed, Ms. Scholl did not respond. (Section 406.11 refers specifically to “Examinations, investigations, and autopsies.” According to Section 406.11, the medical examiners are supposed to determine the cause of death, not the police. In Kyle’s investigation, Detective Bohling claimed that Scholl had ruled his death a suicide, and Scholl claimed that she had been told by the police that it was a suicide. See below for more information.1)

While her non-response in that instance was troubling and very telling, Ms. Scholl’s reaction to the following question was perhaps even more so. When I asked who provided her Kyle’s personal and medical information, she didn’t answer directly. Instead, she stated that she didn’t want to get any of the police officers in trouble.

Next, I told her about a discrepancy in Kyle’s death certificate that I wanted to be corrected. It listed Tom Brennan’s apartment—where Kyle was just visiting—as Kyle’s home address, not his real address in Virginia. She said she was told that Tom Brennan was Kyle’s next of kin. Then I asked her why the police hadn’t called me the night Kyle died. Why was it that a complete stranger, Gerald Gentile, had made that call instead? Ms. Scholl explained that indeed it is the job of the police to notify the family. And, Ms. Scholl continued, “if the medical examiner’s office was responsible for making calls like that in the middle of the night, we would probably hear nothing but a big thump on the other end of the line.”

Ms. Scholl then asked if there was a problem with the investigation. Was there a suspicion of criminal wrongdoing? I asked if she was aware that Tom Brennan and Gerald Gentile are Scientologists; referring, of course, to Scientology’s well-known war against psychiatry and psychiatric medication. She said “yes,” and then told me the prescription date on Kyle’s Lexapro bottle and exactly how many pills were left inside. She said Kyle had not been taking his medication properly, and that you can’t do that with Lexapro. Kyle really had no choice in the matter, I replied, since it was taken away from him and locked in his father’s vehicle.

1. More information regarding Florida Statute 406: “The mission of the medical examiner’s office is to fulfill the needs outlined in F.S.406, to be of service to families of the deceased, and local government agencies. In short, our mission is to determine the cause and manner of death under certain circumstances. This mission requires utmost objectivity. . . .”

(1) In any of the following circumstances involving the death of a human being, the medical examiner of the district in which the death occurred or the body was found shall determine the cause of death and shall, for that purpose, make or have performed such examinations, investigations, and autopsies as he or she shall deem necessary or as shall be requested by the state attorney:

(2)(a) The district medical examiner shall have the authority in any case coming under subsection (1) to perform, or have performed, whatever autopsies or laboratory examinations he or she deems necessary and in the public interest to determine the identification of or cause or manner of death of the deceased or to obtain evidence necessary for forensic examination.

Excerpts from the Deposition of Victoria Britton

Excerpt from the Deposition of Detective Stephen Bohling 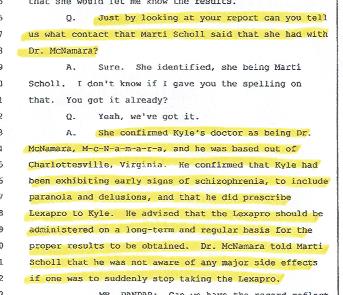 Excerpt from the Deposition of Stephen McNamara MD 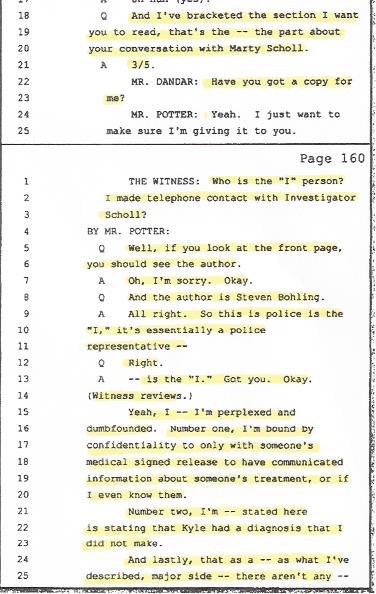 Excerpt from the Deposition of Tom Brennan

Excerpt from the Deposition of Victoria Britton

Excerpt from the Deposition of Detective Bohling 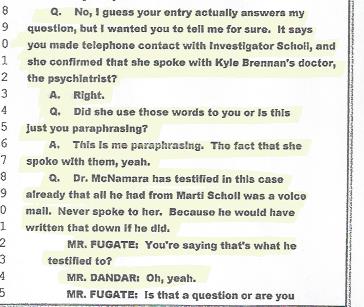 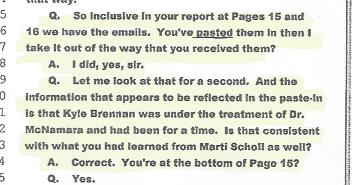 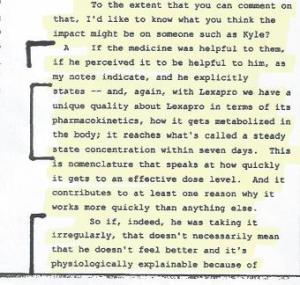 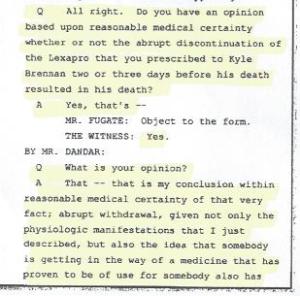 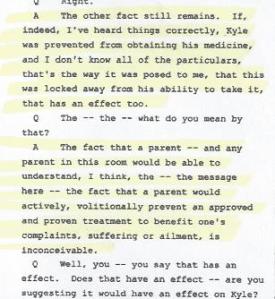 Note: Deposition excerpts of Dr. Stephen McNamara are property of the Estate of Kyle Brennan. Duplication is strictly prohibited without the approval of the estate administrator.

If you have any questions contact Victoria at: vbreton2062 (at) gmail.com.