“In 1985 Scientology lawyer Paul B. Johnson is brought to trial in Orlando, Florida for allegedly bribing Hillsborough County commissioners to favor his client, Hubbard Construction Company. Johnson was defended by F. Lee Bailey.”

Within several months of his son’s death, Tom Brennan hired attorney Paul B. Johnson.  It’s fairly obvious, however, that it wasn’t Brennan who was paying for the legal representation. How so?

Tom Brennan, at the time of Kyle’s death, was employed by the mega-wealthy Church of Scientology. His title was “Director of Public Book Sales.” Brennan’s salary for this illustrious-sounding position ranged between twenty and thirty dollars per week. He supplemented these meager Scientology-slave wages by working at various menial jobs. Brennan hawked rugs alongside a Florida interstate highway, and he also worked as a handyman for Gerald and Denise Gentile. Under Denise’s direction, Brennan mowed the Gentile lawn, shopped for the family groceries, and made various repairs to one of the “news-worthy” Pinellas County rental properties owned by Gerald. (Why was this particular property “news-worthy”? According to a front-page piece published by the Tampa Bay Tribune, Denise Miscavige Gentile, in an act of charitable kindness, had been accepting from down-on-their-luck tenants marijuana cigarettes in lieu of rent.)

So, who had the upper hand in the police investigation? Was it Detective Stephen Bohling of the Clearwater Police Department or attorney Paul Johnson.

Perhaps surprisingly, Tom Brennan—Kyle’s father and the surviving person who knows best what happened on the night of February 16, 2007—was interviewed by the police three times . . . and yet none of the notes taken by the interviewing police officers survive, none!

Is this standard operating procedure for the Clearwater Police Department?! If it is, it’s certainly not supposed to be. Should a police officer who arrives first at a potential crime scene destroy his notes? Not according to the U.S. Department of Justice handbook entitled “Eyewitness Evidence” (available online at https://www.ncjrs.gov/pdffiles1/nij/178240.pdf). On page 14 it states “that a preliminary investigating officer shall obtain and accurately document and preserve information from the witness(es). Preservation and documentation . . . are necessary for a thorough preliminary investigation.” Throughout the handbook, “documentation” of information obtained, and the “preservation” of that information is stressed.

What about the documentation of Brennan’s third police interview? According to Bohling, on November 8, 2007, he requested a third Brennan interview. When Bohling contacted attorney Paul Johnson to arrange a date and time, Johnson stated that he wanted to monitor the telephone conversation between Bohling and his client. This would require a three-way call, and this police interview—if conducted from the Communications Center at the Clearwater Police Department—would have automatically been recorded. However, Detective Stephen Bohling—who by 2007, had worked the bulk of his nineteen years as a police officer with the Clearwater Police—later testified that he couldn’t figure out how to utilize the police department’s three-way call system in order to record the interview.

Why didn’t he simply ask someone for help? Is Bohling so incompetent that 1) he couldn’t remember how to use equipment he’d used before, and 2) he didn’t comprehend that somebody at the police department must have known how to operate the three-way system, and 3) he was incapable of asking for help or was there possibly a reason that the detective didn’t want the interview recorded in the first place?

According to Bohling’s police report, attorney Paul Johnson saved the day by offering to do the three-way interview using the system at his law firm. But Bohling—in perhaps a ham-handed attempt to manipulate the information—contradicted himself in his own report. On page 29, he stated that “Attorney Johnson advised [on November 8, 2007] that he did not wish to have the interview with Thomas Brennan recorded.” And, of course, the lawyer from the Scientology-funded firm of Paul Johnson, got his wish. The third and final interview with Brennan went unrecorded and all the notes taken by the detective were destroyed. Any reasonable person would have to wonder why.

All of this—the lies, the mishandling of information, the obstruction of justice—came at the expense of a twenty-year-old college student whose existence—to the powerful and corrupt powers-that-be in Clearwater, Florida—was absolutely meaningless.

Excerpts from the Deposition of Detective Stephen Bohling 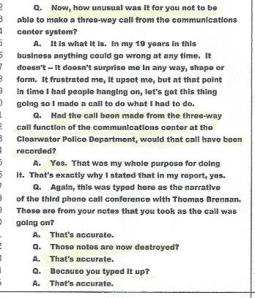 Excerpts from the Clearwater Police Report

Excerpt from the Deposition of Officer Jonathan Yuen

Excerpt from the Deposition of Denise Miscavige Gentile 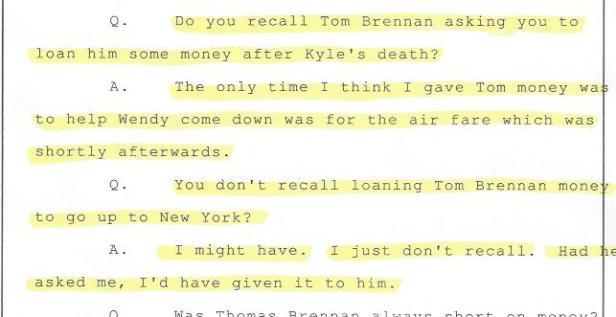 Excerpts from the Deposition of Thomas Brennan 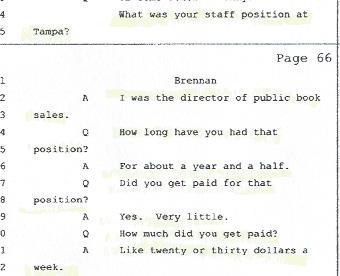 In 1985 Scientology lawyer Paul B. Johnson is brought to trial in Orlando, Florida for allegedly bribing Hillsborough County commissioners to favor his client, Hubbard Construction Company. Johnson was defended by F. Lee Bailey.

If you have any questions contact Victoria at: vbreton2062 (at) aol.com.

One thought on “Who Was Really in Charge of the Investigation?”